Birds/Spirits slugfest results in tie at 8 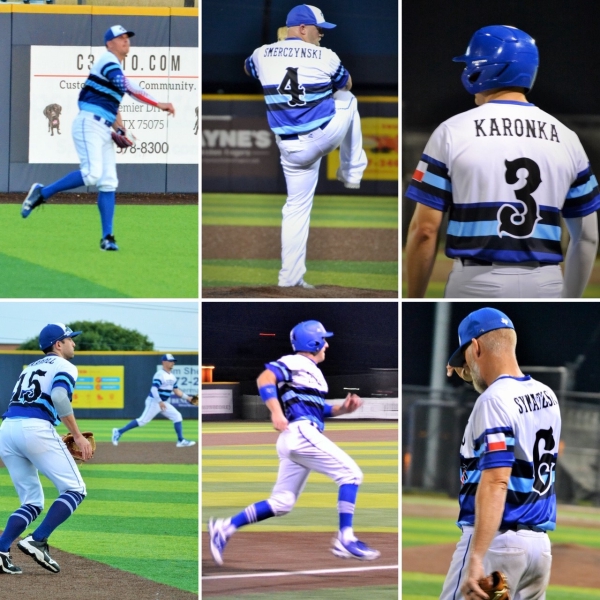 It was a roller coaster of emotions and battles back and forth all night but the end result was a tie as the NTX Thunderbirds and Dallas Spirits walked away from Graham Field Thursday night locked at 8.

The Spirits jumped on Tbird starter Fabian Mendive for 4 runs in the top of the first inning. They added one more in the second to hold a commanding 5-0 lead. Brent Smerczynski came in relief in the 2nd and held the Spirits scoreless until the 7th walking 2 and striking out 3.

The tbird offense then began chipping away at the lead, scoring 3 in third inning. Jeff Whanger , Mendive and Jared DeRusha all singled to load the bases before Jody Nicewonger singled to drive in the first run. Brian Synatzske followed with a sac fly and Smerczynski singled to right to drive in the third run. John Menth also singled in the inning for the birds.

In the fourth, Rob Carroll led off getting hit with a pitch, stole second, moved to 3rd on a ground out and scored on a Ryan Karonka sac fly. Ron Short then took a hit by pitch as well, moved to 2nd on a wild pitch and scored on Whanger’s second hit of the night to tie the game at 5.

In the 6th. the Birds would take the lead, albeit for a short time. After a Smerczynski single, there was a pop out, then Brad Bode reached on a fielders choice, forcing the runner out at 2nd. Carroll singled putting two runners on . Bo Vaculik then had a 10 pitch battle at the plate, fouling off pitch after pitch before finally driving in the go ahead run with a 2-out single to left scoring Bode. The big blow followed with a Karonka missle to the right -centerfield wall for a 2 run triple.

Smerczynski couldn’t shut the door in the 7th and preserve the win. After a leadoff walk, he got a pop up and a fielders choice, things looked good. The heart of the Spirits lineup stepped up and strung together 3 straight singles before a 2 strike HBP and a walked tied the game at 8.

The birds still had a chance to win in the bottom of the 7th loading the bases with 2 outs , but failed to push the winning run across. While nobody likes ties, this was a hard fought battle on both sides with timely two out hits, high tension and big momentum swings.

The birds return to action Thursday night against the Knights for a 7pm contest at First Baptist Academy.