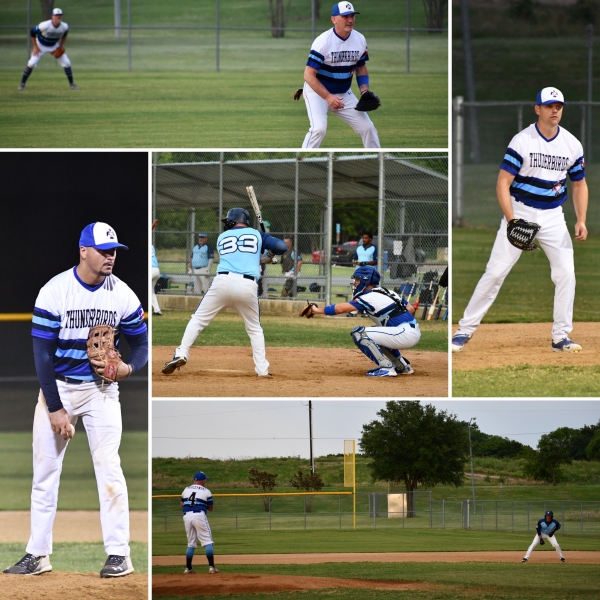 Your NTX Thunderbirds brought the sticks and ran away with the contest Thursday night, beating the Dallas Spirits 12-3. The birds racked up 12 runs on 15 hits with every player reaching base at least once.

After falling behind 2-0 after the top of the first, the birds bounced back with 3 runs in the bottom half of the inning and never looked back after a leadoff double by Brian Synatzske and a RBI double by Rob Carroll sandwiched between run scoring singles by Brad Bode and Don Massoud . The birds put the Spirits away for good in the 5th inning by scoring 9 runs. with contributions by every player in the lineup…. Synatzske, Brent Smerczynski, John Menth, Bode, Carroll, Massoud, Bo Vaculik, Ron Short, Jeff Whanger, Ryan Karonka and Mike Trujillo all either reached base, got a hit or drove a run in during the inning.

Brent Smerczynski was the starter on the mound for the Thunderbirds. After giving up 2 runs on 4 hits in the first, Smerczynski settled down only allowing 1 more hit the rest of the night while collecting 5 more strikeouts and improving his record to 3-0. Massoud picked up his first save of the season going the last 2 innings giving up 1 unearned run and picking up 3 Ks.

The Birds return to action this Thursday against the Modoc. The game is tentatively scheduled for 8:45pm at Reverchon Park in Dalkas.