hide
hide
No announcements have been posted yet for Thunderbirds. 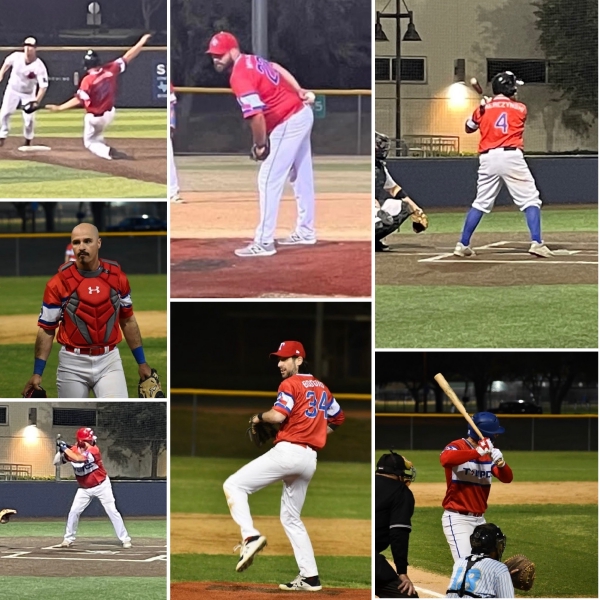 In Game 1, the Tbirds dropped the Modoc 7-3 to force the winner-take-all “if” game.

Marc Boggio earned the victory on the hill for the Thunderbirds. Boggio was stellar, allowing five hits and three runs (2 earned) over seven innings, striking out six Modoc batters.

In Game 2, Thunderbirds 35+ fought back after falling down by six runs in the fourth inning. The comeback fell just short though, in an 8-6 defeat. The Thunderbirds scored four runs in the failed comeback on a singles by Marc Boggio, Don Massoud, Bodie Wilson and Jeff Whanger, with a walk by Rob Carroll, a sacrifice fly by Cliff Brade, and an RBI double by Brent Smerczynski where he represented the tying run before Modoc shut the door.

Wilson took the loss for the Thunderbirds. The righty pitcher surrendered seven runs (3 earned) over three innings, striking out two. Sean House finished the game, tossing 2 innings while giving up 1 run and striking out 1.

Your NTX Thunderbirds finish the season as league runner up for the second year with a 14-5-1 record. 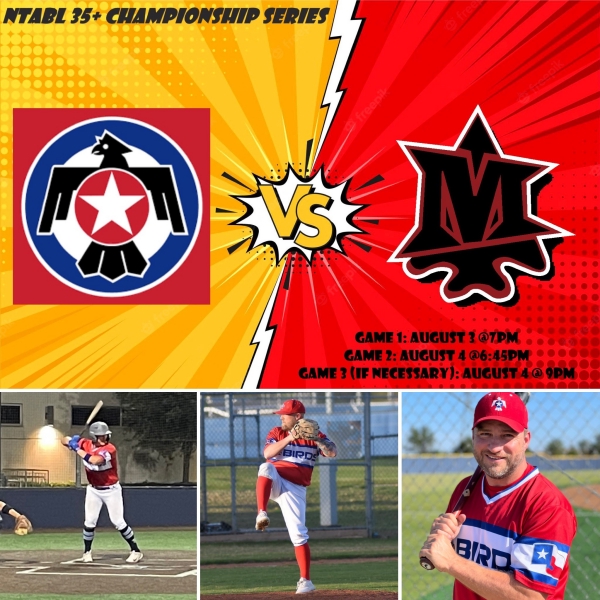 Your NTX Thunderbirds lost a heartbreaker Wednesday night in the opener of the Championship Series against Modoc in the last inning 7-4.

Dustin Harrison was the offensive stalwart, going 2 for 3 with a double, a home run, 2 runs scored and 3 RBIs. Matt Allen also added a single and double on the night. Other Tbirds collecting hits on the night include Cliff Brade (with 3 SBs), Don Massoud and Bodie Wilson.

On the mound Brent Smerczynski took the loss for the Thunderbirds. The lefty battled back and forth with Modoc ace Adam Gremillion. Both tossed complete games. Smerczynski gave up 4 earned runs, but Modoc scratched across 3 runs in the last inning after the birds battled back to tie the game the half inning prior.

The Birds are down 1 game to 0 in the best of 3 series and need to win the first game tonight at 6:45pm to keep hopes alive and force a winner take all game 3 at 9pm tonight.

Marc Boggio will get the start on the mound in game 2 with Wilson slated for the if game.

Games will be played at Graham Field at Prestonwood again tonight. 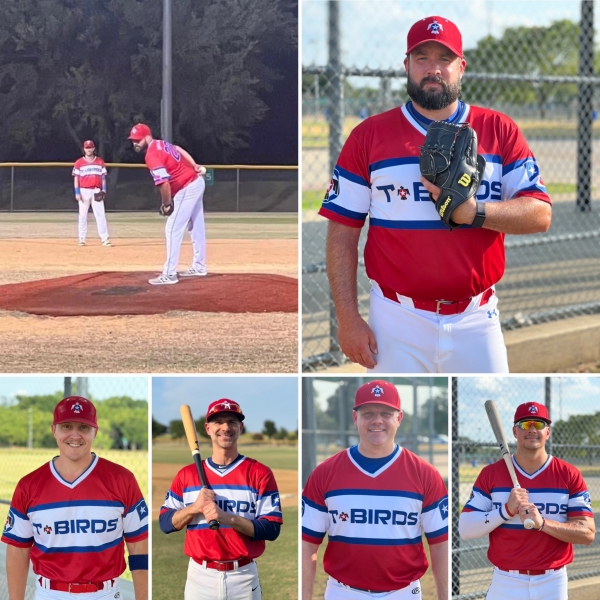 Your NTX Thunderbirds took the lead late in the game in a 14-3 victory over Oak Cliff Pelicans Thursday night. The game was tied at 3 after 2 innings, but the birds opened things up with 5 runs in the 4th and 6 more in the 5th.

Bodie Wilson was the winning pitcher for Thunderbirds. The righthander allowed five hits and three unearned runs over five innings, striking out five to improve to 5-1 on the year.

The Thunderbirds racked up 13 hits. Rob Carroll, Ryan Karonka, John Menth, and Matt Allen each had multiple hits. Other Thunderbirds collecting hits on the night included Cliff Brade with a 2-run homer, Brent Smerczynski, Jody Nicewonger and Jeff Whanger. 10 of the 11 birds had RBIs on the night, but Allen and Brade led the way with 3 each.

Last night’s win sends the Thunderbirds into the Championship Series to take on the defending champion Modoc. Game 1 takes place Wednesday evening at 7pm with Game 2 taking place Thursday at 6:45pm and the “if” game to played immediately following. All Championship Series games will be play at Graham Field @ Prestonwood. 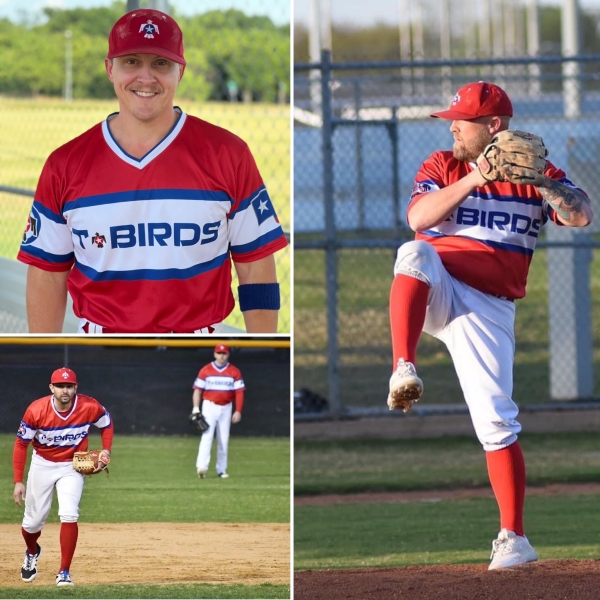 Brent Smerczynski was the winning pitcher for Thunderbirds improving to 7-1. Smerczynski tossed a complete game, allowing 3 earned runs on 10 scattered hits, walking 1 and striking out an impressive 11 Pelican batters.

Thunderbirds got things moving in the second inning. Rob Carroll hit a solo homer to start the scoring and added 2 more on an RBI single by Matt Allen and a fielder’s choice by Sean House. Thunderbirds put up three runs in the third inning. John Menth, Don Massoud, and Marc Boggio each had RBIs in the frame. Other Thunderbirds collecting hits on the night include Smerczynski and Ryan Karonka and House. 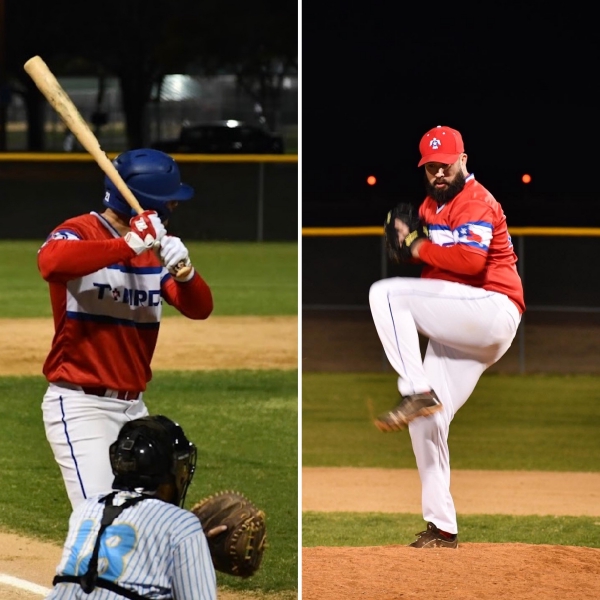 Your NTX Thunderbirds wrapped up regular season play last night with a 6-2 win over the Roughriders improving their record to 11-3-1.

The birds used a trio of pitchers to shut down the Roughriders offense. Bodie Wilson got his 4th win of the year tossing four hitless innings while notching 4 Ks. Don Massoud threw a shutout 5th and Dustin Harrison closed the game out pitching the 6th.

The offense was once again led by John Menth who was 3 for 3 and just a HR shy of the cycle with 3 RBIs. Rob Carroll had 2 hits, 2run scored and a stolen base on the night. Other Thunderbirds collecting hits on the night included Brent Smerczynski, Massoud, Ryan Karonka and Matt Allen.

The Thunderbirds look to face the Pelicans next week as the playoffs begin. Time and place have yet to be determined.